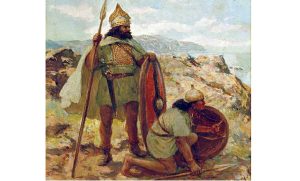 The majority of European men are descended from just a handful of Bronze Age male ancestors, says a new genetic study in the journal Nature.

The presence of genetic material from just a few men in the Y chromosome sequence resulted from a population explosion several thousand years ago, researchers said. The team of scientists found that there was a huge increase in the population 2,000 to 4,000 years ago, in a band from Greece and the Balkans to the British Isles and Scandinavia.

Read the rest of this article from Ancient-Origins.

Me, Myself and I

The Political Origins and Evolution of the Global Economic System

Filmmaking Tips for the Independent Filmmaker
Still Finding My Way

Gazing into the Reflective Pool

A place for film & TV costumers to discover and share